And Then There Were None- Wildwood Elections Presented Few Contested Races

Kelley Woerther Triples Down on Unconventional Facebook Activity; Could this be a drag on Tim Woert

Kelley Woerther has served as a member of the Historic Preservation Committee, is an active member of We Are Wildwood, and is married to former mayor and now city councilman Tim Woerther. She has filed numerous failed ethics complaints costing the city thousands of dollars, and has a penchant for Facebook activity that is unusual for someone in her position. Mr. Woerther is widely thought to be considering a run for Mayor in 2020, but will his wife's unorthodox social media

At its April 23rd meeting, new members of the Wildwood City Council were sworn in. As previously reported two members gave farewell addresses. Both outgoing members spoke about the need for the new council to move forward and to prioritize policies over personalities. At the same meeting Mayor Bowlin struck a positive note when he gave his annual State of the City address. Bowlin emphasized past accomplishments, and future challenges including the proposed forced city-cou

At its April 22nd meeting, the new Wildwood City council was sworn in. There were three outgoing council members. Both members who opted out of running for re-election, Ward 2 Councilman Don Bartoni, and Ward 7 Councilman Greg Stine both made heart-felt farewell statements. Ward 3 Councilwoman Tammy Shea, who lost re-election, opted out of her last meeting. Bartoni thanked his wife and the whole council. He thanked Councilman Ray Manton for mentoring him and his friendship

What is Wildwood Matters? It's Open, Transparent and Accurate!

Wildwood Matters (WWM) is a blog which is dedicated to news and opinions regarding the City of Wildwood. It is run by me, Steve Taylor, a former City Council Member and current resident. Wildwood Matters began its reporting during my successful attempt to pass Wildwood's new Free Speech Amendment. The amendment allows residents to directly address the City Council and its Mayor during the public comment portion of the city meeting. During the debate over my Free Speech bill,

The date for the special election for Wildwood's Ward One seat has been agreed to by candidates Larry Brost and David Hudson. It will be June 4th. At the April 2, municipal election both Brost and Hudson recieved 286 votes creating a tie. State law allows for either a special election or deciding by lot the winner. After an April 15th meeting, both candidates decided to opt for a new election, which would cost approximately $8,000, putting to rest speculation that a coin tos

In the 1980's comedy classic Ghost-Busters, it was the Mayor who spoke for the City. When confronted with strange paranormal activity of "biblical proportions", he told the fictional archbishop, "I am going to hold a press conference and tell everyone to pray." It is inconceivable that any mayor would have to defer basic public relations responsibilities to a designated spokesperson, but that is what is being suggested by Kevin Dillard, a Wildwood ward 3 councilman. At the 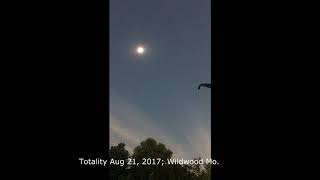 One of the coolest things to ever happen in Wildwood was the total solar eclipse of 2017. On August 21, the path of totality swept over the entirety of our city. Four planets including Mars and Jupiter were visible. For many, the sounds of crickets and other wildlife responding to the event was most memorable. And don't forget the 2004 transit of Venus! https://patch.com/missouri/eureka-wildwood/rare-venus-transit-captured-right-in-wildwood Paid for by Steve Taylor

The Art of the Flip-Flop / First Kennedy, Now Sheeley Does a U-Turn

Wildwood Wood Matters is committed to opening a space for dialogue and intelligent debate. Only in the most extreme cases of obscenity or slander will a comment ever be deleted. Sunshine is the best disinfectant and the truth will out if free and open speech is allowed. Not long ago WWM had a post on how Bill Kennedy had endorsed me as a candidate when he believed that I was on his political team, but engaged in personal criticism when I demonstrated independence as a membe

What do Lou Ferrigno and Joe Garritano Have in Common?

Well, they are both strong. Joe having won re election to his Ward 8th seat by over 88 percent of the vote, and Lou being the avenging alter-ego of fugitive scientist, Dr. David Banner, in the classic TV series The Incredible Hulk. But this Friday Joe Garritano and Lou Ferrigno discussed an even closer connection at the St. Louis Convention Center during Comic Con; St. Athanasius Grammer School in the Bensonhurst neighborhood of Brooklyn. Both gentleman attended that school
1
2